Here’s how to make a healthy vegetable soup. The ingredients are for leek, nettle and potato, but you can adapt this recipe for any vegetables that you fancy, or which you’ve grown in your own garden.

There are no rules in soup! Most importantly, if you want the kids to eat it too, get them to make it with you.

Stinging nettle has a flavour similar to spinach and is rich in vitamins and minerals – so it’s a tasty, healthy and unusual ingredient to add to your soup if you want to. The fun – and the dare – of picking them adds some interest to the activity if you’re doing it with kids.

When to pick nettles: Nettles are best harvested in early spring, after they’ve produced little green flower heads at the top of their plants.

Where to pick nettles: If you don’t have them in your garden look for wild nettles growing in ditches, forests and fields. Avoid those growing near roadsides, which may have absorbed exhaust and chemicals. Also, don’t harvest nettles on other people’s property without their permission.

How much to pick: Never take all of a nettle patch, but only what you can use. If you only find one plant, move on and find a larger patch. 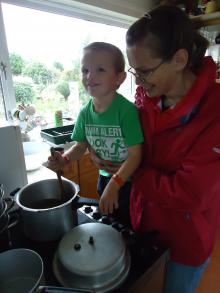 If you have a bumper crop of spinach, dry it and then freeze into portions. You can then add it to curry, stews and soups.